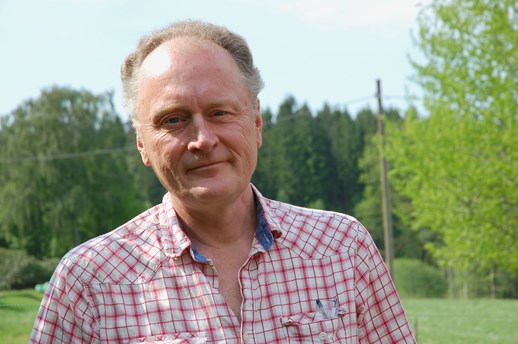 Since the first Kalv Festival, Max Käck and the festival have been inseparable. Max has been the one who during 16 editions tirelessly expanded the meaning of a festival for Contemporary Music in Sweden. However, everything has its time, and with this PM we announce that Max Käck will now instead be festival general in emeritus. That is, we do not let him stray from being part of our conversations, and taking part in our visions, but Max feels that the time has come when he wants to enjoy from the side, attend the festival as one of the audience!

Max Käck has given contemporary music a new place. Not just for a small rural crowd in Kalv, but made the the festival a matter for the whole of Sweden. However, the Kalv festival has also been given an international weight. The Kalv festival may take place in a quiet, small place, but it resonates throughout distant lands. Few has a better overview of Max’s contribution than Kalv festival’s chairman, Martin Lindman, who has also been integral from the beginning:

“When the plans for a contemporary music festival in Kalv began to take shape almost 20 years ago, we did not know that this integration project for music culture would be such a success. The person who without comparison has had the greatest significance for this development is Max Käck, our festival general, galleon figure and primus engine. With his solid knowledge, his professionalism, his network of contacts and his enduring ability to secure funds for the festival’s survival year after year, Max has guaranteed quality and breadth and an inclusive perspective. I myself have been attracted by his ambition to highlight the chamber music format and the classical instruments. The friendship that the years of co-operation have built up has enriched us here in Kalv, and when he now hands over the baton, it does not feel like a farewell. We have a friend for life, and the sparse sounds of his own music continue to float under the vault of our church.

Thank you, Max, for your efforts for the festival, for the music and the philosophy and for Kalv!

Chairman of the Association Kalv Festival ”

It is not a goodbye, but a big, sincere thank you and we now wish Max to enjoy the festival and see how the child he raised manages the journey past adolescence!